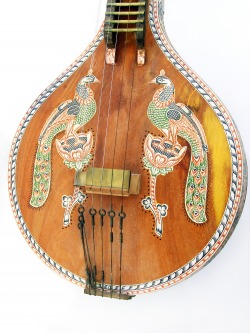 Carnatic Music, the South Indian style of music that evolved from Vedas scriptures, is divine and spiritual. While nearly all Carnatic compositions praise one God or another, Carnatic music is still spiritual music, not religious music.

One could argue that the great composers of Carnatic music never sang about Christ or Prophet Muhammad  but it is also true that they all sang about the spirit, Self Realization, Kundalini and chakras, which are at the root of spirituality.

And the biggest truth that I maintain is that Carnatic music is timeless like all great forms of music. So great composers will continue to come and they may well sing about Christ and Prophet Muhammad. By restricting a great entity like Carnatic music to Hinduism would a big mistake that we have seen repeated by nearly every religion. The human ego always wants to be in a position of understanding of superiority and tries to draw boundaries and box everything into its own understanding and control – history has shown that humans always tried to dominate, control, confine. One can only say that there are no great compositions praising Christ AS YET.  Time, the great and all powerful entity has its plan and will bring on such composers in coming centuries or at least will re-establish the spiritual nature of Carnatic music and Indian Classical music.

Greatness is all about expansion, breaking barriers, achieving new heights, not about restrictions, confinements and narrowness. Like all great discoveries, Carnatic music is spiritual and will be spiritual and great and limitless. Human beings are yet to discover some hidden parts of it and one of those is compositions and the universal praise of all deities.

I am not trying to expand it with my arguments above, for I do not consider myself anywhere near being great or capable or talented enough, I am only making a case for not restricting its greatness willfully because of human ego and in the limited time window of current times where human beings are on a rampage to restrict, divide, confine, control and dominate.

And to give some strong evidence and backing of my claim that Indian Classical music belongs to the higher realm of spirituality than the narrower realm of religion, I have personally sung some songs on Christ (and "Gurbani" on Guru Nanak) in Indian Classical style and felt as deep a spiritual experience as any. Sure, many staunch Carnatic devouts would raise their eyebrows as they read this, but, you know, the truth and the ultimate higher truth of Spirituality is most important.