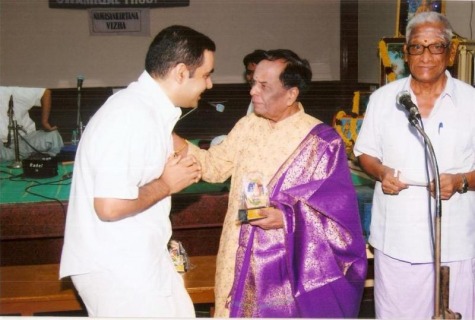 Interview with the Hitavada, Nagpur on Music and Spirituality

IF RAGAS were colours, Shankar Ramani's world would translate into a pastel-hued, gently undulating landscape traversed in a smooth glide uninterrupted by sudden gusts or stormy squalls. This young vocalist who is a disciple of O. S. Thiagarajan has a clear, even-toned voice.

There was substance enough in the Shanmukhapriya alapana to command attention, with thought-provoking elaboration at the nishada and the tara sthayi rishaba. The raga unfolded as a succession of long-drawn, closely-knit prayogas that would have registered with greater impact if interspersed with shorter phrases and pauses for contrasting relief.

OST's senior disciple, an academician, who has accompanied him in several concerts and also sung independently on a couple of occasions at Hamsadhwani, Shankar Ramani (U.S.) gave his most outstanding performance with a Khambhoji RTP in the most intricate tala (tisra jati, triputa four kalai). The pallavi line itself was fascinating: "Ananda Natanam Aadinar Tha Thimi Tha Thom Ena Kanaka Sabhaiyil". While the alapana was very pleasing and covered all the gamuts it was the tala beats of the vocalist that struck most. At every teermanam he got an applause from the audience who gave it in good measure to the violinist S.V. Ramachandran and young Rohan Krishnamurthy (mridangam) also. There was the usual ragamalika swaras in Nattai, Revathi and Valaji. Rohan himself appeared to enjoy the intricate RTP, which quite challenged his laya prowess. After subtle beats and teermanams as answers to the vocalist and the violinist he went all out in the tani avartanam. Four years ago Rohan made his debut at Hamsadhwani and is it any wonder that with dedication, marathon practice and accompanying visiting senior vidwans he has improved by leaps and bounds. Incidentally Shanker Ramani has made OST proud with his scholarly exhibition. The Hamsadhwani varnam "Jalajaksha" was a good start followed by Dikshitar's "Renukadevi" (Kannadabangala.) Pleasantly restrained in tarastayi he sang "Kshirasagara" in Devagandhari and followed it with Syama Sastry's "Tharunam Meedamma" (Golipantu), giving an altered mood — clever work indeed. In keeping with his master's way of concluding the concert he sang "Naadupai" Madhyamavati).

Shankar Ramani offered an assorted fare. He has a singular enthusiasm for Ragam Thanam Pallavi. In this concert, he presented ‘Kalavathi Kamalasana Yuvathi Kalyanam Kalayathu Saraswathi,’ in Valaji (Kalavathi in Hindusthani). It was set to Thisrajathi Triputai, Khanda nadai. The ragam and pallavi came off with the exquisite beauty, intrinsic in the raga. This cannot be said about the thanam. His control over laya is incredible. Meera Sivaramakrishnan on the violin succeeded in bringing out the melody.

Shankar started the recital with the Kedaragowla varnam ‘Sami Daya,’ followed by the Malahari piece ‘Sree Maha Ganapathim’ of Harikesanallur Muthaiah Bhagavathar. The swaraprasthara was absorbing. The Hamsanadham piece, ‘Kalyana Rama’ of Oothukkadu was a neat rendition that brought the devotional aspect to the fore.

‘Nidhichala Sukhama’ of Tyagaraja in Kalyani was the main piece. The raga alapana was adequate. The niraval and swaraprastharas at Dasarathi – five aksharas after samam in misra chapu – were a treat. Thanjavur Kumar on the mridangam set the very grammar for accompaniment. His thani along with Pudukkottai N. Ramachandran on the ghatam was a lovely rhythmic exchange that included some perfect thisra korvais as well.

The Vasantha Bhairavi kriti ‘Prasanna Venkatesam’ was short and sweet. Shankar concluded the concert with a Virutham followed by ‘Chidambaranai Digambaranai’ in Sindhu Bhairavi. The hall provided the apt ambience of chamber music.