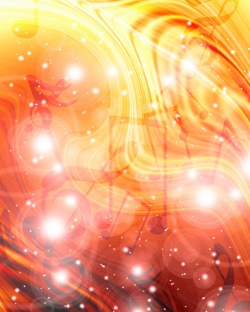 To successfully awaken the energy in others, a musician must first have his / her energy awakened. When the subtle energy within is fully live and the energy flow is in proper balance, the musician becomes the instrument of the Cosmic and Primordial power, in much the same way that air flows through the holes in a flute and produces wonderful music. The flow of the Kundalini energy through the musician’s energy centers transforms him or her into an instrument capable of giving enlightenment to anyone.

The musician must carefully test the vibrations from different ragas, melodies or tunes and let inner instinct guide him / her to select the techniques and melodies that will provide maximum vibrational impact on the listener. As with all musical prowess, this skill comes with rigorous practice. Practice must also be combined with heightened spiritual awareness and the subtle knowledge of the energy centers.

The enlightened musician develops the ability, over time, to detect the energy blocks in a particular audience during a program. He can help remove those obstacles by rendering the right songs, tunes or notes with the right intensity.  Once the energy blocks are removed and the energy is flowing smoothly, it becomes easier for the audience to experience the energy and the feeling of inner silence or “thoughtless awareness.”

Alignment to the scale (shruthi, as it is called in Indian music) and purity of notes are of paramount importance. The closer the rendition of the note is to its original frequency, the greater the intensity of vibrations or energizing of the chakras and the deeper the audience's experience.

Your technique of rendering will be important. I know of many musicians who focus on earning appreciation by intellectually pleasing the audience through musical feats of sheer brilliance. But such attempts are likely to create obstacles in a musical session focusing on spiritual enlightenment, for the listener's mind and attention is being stimulated on the mental level, rather than being focused inward to a higher state of awareness where "thinking" is slowed or stopped.

The real secret is that there is no technique, and that, in fact, the musician should not focus on employing "technique" here. Rather he/she should be rendering the music straight from the heart with utmost devotion. Since the spirit resides in the heart, such music has a powerful resonance with the all-pervading power and greatly enhances the process of energy awakening, or — if the audience is already enlightened — the experience of meditation. Sure, a musician must focus on the audience while performing, but not on earning appreciation from the audience. Rather the musician should focus on getting the audience to humble down and fall into a state of bliss and joy in order to attain the greatest spiritual experience.

How much technical musical knowledge must a musician have in order to evoke a spiritual awakening in others? I’ve met several musicians who are walking encyclopedias in their field of music — absolute masters who are the most learned and scholarly about all aspects of their style of music. But when it comes to applying music to spirituality, knowledge plays a secondary role. The quality of the music and rendering is far more important. The musician who knows only a few ragas but renders them with the highest quality along with a deep sense of devotion and humility will most certainly produce much stronger vibrations and more ably influence the listener's spiritual growth and experience than the musician who knows every raga in existence but doesn't render them with resonance or have the proper Bhakti (devotion) and humility.

If the mere extent of knowledge were an indication and measure of spiritual prowess, then a brilliant college student who can digest knowledge in record time would be more spiritual than any saint or guru. Scholarship is not enough. It's the depth, quality and subtlety that play the more important role in awakening and strengthening spirituality, rather than the breadth of knowledge. The same holds true for music. I know some very simple, childlike, innocent musicians with wonderful hearts who know only a few ragas but have a far more remarkable spiritual impact on their audiences than those who are knowledge maestros and intellectual gymnasts.

In fact, despite all the elaborate description of spirituality and ragas above, how many ragas do you think I can render where I can realistically hope to have a tremendous impact on the audience? Not more than a handful. Yes, I’ll admit, I am hardly an expert and still learning, but my focus is on infusing more depth, more quality and more heart into my each performance, rather than on amassing the most sophisticated knowledge of chakras, ragas, et cetera or building a vast repertoire of songs.

Perhaps you're thinking, “That's what people who don't have enough knowledge always say — knowledge isn’t important or necessary.” But I'm not suggesting that knowledge isn't important. The more knowledge you have about music or spirituality, the better and more proficient you will become. What I am suggesting is that this knowledge cannot come at the expense of depth, quality and emotion in music. If you can achieve both, hats off to you. I’d have to say that I have yet to meet people who grow at a rapid pace on both depth and breadth of their music at the same time. The exception, of course, is those few musicians who are born realized…

Well, there’s a new term for you. Yes, there are a few rare souls walking the earth today who were born with spiritual enlightenment. They are indeed exceptional and of a caliber so exalted that I cannot even adequately describe them, so I'll leave them out of this discussion for now.

But for ordinary mortals like you and me, focusing on the actualization of spirituality, the quality of your music, and genuine emotion when rendering music should take precedence over endless learning and amassing of technical knowledge. The ultimate test of strength for a musician is the extent to which he or she can invoke in the audience the emotions and experience of energy awakening and have an impact on listeners' spirituality.

I attempt this constantly in performances, with varying degrees of success, because, keep in mind: we are ultimately an instrument of the power behind the universe. If it were possible for us to always be 100% successful — if this process became fully controllable by us — then we would have become the Power itself, which is obviously somewhat far-fetched, though not impossible. This concept holds true for the audience, as well. After spiritual enlightenment, the audience must focus on improving the qualities associated with the energy centers. You will not become more spiritual by simply memorizing the chakras, their qualities, their frequency of vibration, etc..

Emotional resonance is a huge part of the spiritual impact. The highest and most important emotions to be conveyed, expressed and felt by the musician are devotion, humility and surrender to the all-pervading power. These emotions must be combined with a very strong and pure desire that the audience receive spiritual enlightenment. The musician shouldn't think for a minute that he / she is doing anything; rather, she should realize that she is a mere instrument who can help facilitate the passage of the ultimate power and energy onward to the audience.