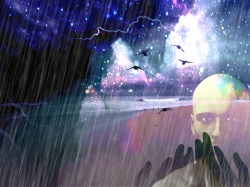 What happens after attainment of Spiritual enlightenment — is this a one-time phenomenon?

No, spiritual enlightenment is not a one-time thing. It is a lifetime process that just gets better and better. When we follow through with meditation for the rest of our lives, we achieve higher and higher states of spiritual awareness and awakening of the energy centers. One must continue to strengthen the energy within the energy centers and absorb the qualities that each energy center represents, ultimately becoming an ideal human being who has few negative qualities or emotions or thoughts. In this enlightened state, one can come very close to being a true reflection of God Himself.

Thus, a person's entire spirituality [state of being] becomes very subtle and closely identified with the qualities of the spirit, i.e, being the witness, enjoying everything in life, being at peace and so on. One then reaches a very high state of evolution on the chain of human evolution, which begins with the amoeba stage through various living organisms that lead to human beings and ultimately to the most sutble and evolved human beings – the true super human beings. At this highest state, one attains what has been described by all ancient scriptures as salvation.

God’s beautiful desire was to create this wonderful earth and all its various living beings, and create a divine play or game in which human beings could participate and gradually evolve over ages. We are now in the age where human beings are nearing the ultimate state of evolution — we are at the doorstep of salvation and enlightenment. If our inner desire power is strong enough, we will likely receive our enlightenment and enjoy all its fruits.

Does enlightenment make normal people go crazy, go into confinement away from civilization, or in any way give up a normal life?

Definitely not! If the talk of enlightenment evokes a mental picture of a weird yogi-type person going to a mountain, sitting cross-legged and meditating for years, I don't blame you. That's what some of our ancestors tried to do; in fact, human beings went crazy trying all sorts of bizarre things in an attempt to get enlightenment. Some even concluded after reaching a certain degree of craziness that they had become enlightened, that this craziness is what enlightenment is. Some even taught some of these strange methods to others.

Well, the enlightened people I know are perfectly normal people who live in the same world as you do, have jobs, families and do everything that others do. The big difference is that on the subtler plane, they are far more mature, emotionally balanced, peaceful on the inside, and able to come up with miraculous breakthrough solutions. They're mostly of strong character and will and achieve what they set out to achieve. Then there are many who, like me, are works-in-progress — humans who are striving to be all these things. The difference is that it's so much easier to achieve and become these ideals after enlightenment. As they say, knowing your problems is the first step to solving them. Well, at least I know my problems.