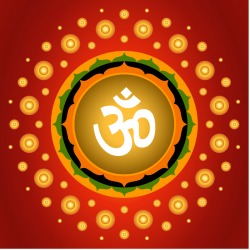 Unquestionably. The origin of music dates as far back as the origin of sound itself. When the Divine mother or the Feminine power of God Almighty manifested Herself, the first sound was created. This sound is called “OM” or Omkar (which is spiritual, rather than Hindu). The Divine and Primordial Mother created the entire universe with the power of this sound, the OM.

OM is the manifestation of the three powers of the Divine mother:

“A” – The power of pure Desire

“M” – The power of evolution


A combination of the three syllables A-U-M forms “AUM,” or the sound “OM.”

OM or Omkar is the beginning of music.

Thus, music originated in the heavens and has its origins in spirituality. The Gods brought it to earth by giving it to saints and scholars who were gifted with the ability to detect and understand it, then create the notes and various forms of music with appropriate, rules, structures and methods. There is no doubt that musical sounds are divine and have a strong correlation with spirituality and divinity.

The entire universe was created by the energy of the Primordial Divine Mother through the Primordial Sound “Omkar.” From the Omkar, five elements were formed: first, space and ether; second, air; third, fire; fourth, water; and last, Earth.

These five elements combined to form the Galaxies, stars and planets, as well as the human body. Each element contributed to the evolution of the entire human body, thus, the human body is a miniature form of the Cosmos, since the Cosmos and humans are composed of the same five elements. Our bones are composed of the Earth element; our blood and other fluids of the Water element; Vital energy of the fire element; and our movements employ the Air element. Finally, our bodily form is shaped by the Space element.