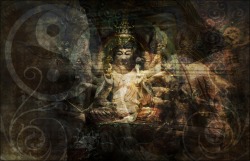 Music as a form of worship or appreciation of God

As musical styles and structures evolved, music remained true to its highly spiritual origins. Ancient musicians and saints used it to praise and worship God. (Remember that true worship is spiritual, not religious.) But somewhere along the line, spirituality was conflated with religion. Music, too, began to be identified with specific styles and specific religions. Today, we've reached a point where many forms of music sound almost religious, instead of sounding truly spiritual.  Because the ancient saints sang praises to God, and human beings confined those Gods narrowly to their religion and temples, music also got confined to temples and to specific religions.